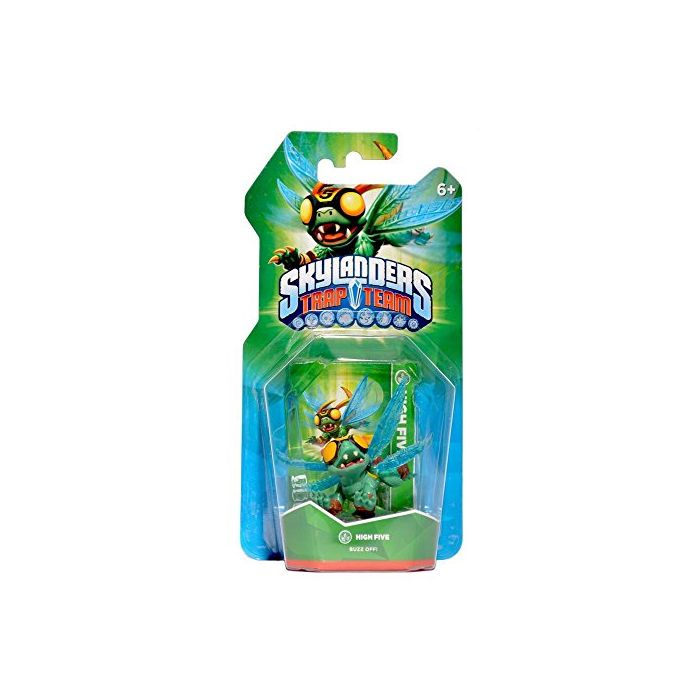 Skylander Trap TeamFigures work on all platforms. 3DS, Wii, PC, PS3 & XBOX 360Please note: This Skylanders Trap Team character requires the Traptanium Portal (included in the Trap Team Starter Pack) to be used in-gameIncludes:Thousands of years ago, the Giants fought epic battles in Skylands but were banished to Earth. With a new threat looming, it's time to bring them back to join forces with the Skylanders to defeat Kaos once again. Only you can put them on the Portal of Power to unleash their strength in the ultimate battle to save Skylands.High Five is one of the most skilled sky racers of all the dragonflies. But as the fifth son of the Royal High Flying Dragonflies, he was not allowed to enter any of the racing tournaments that took place each year because of his age. Instead, he was forced to watch from the sidelines as his four older brothers competed for the coveted Trophy of Sparx, which legend has said holds magical properties. One year, during the biggest racing event of the season, High Five learned that the Troll Racing Team had stolen the valuable trophy and were going to use the race to cover their escape. He quickly took action, jumping into the race and using his amazing flying skills to weave and dodge his way to the front of the pack, where he caught up to the trolls and brought them down. For his actions, High Five was given the Trophy of Sparx. Even more importantly, he was made a Skylander, where he now helps protect Skylands from any evildoers.