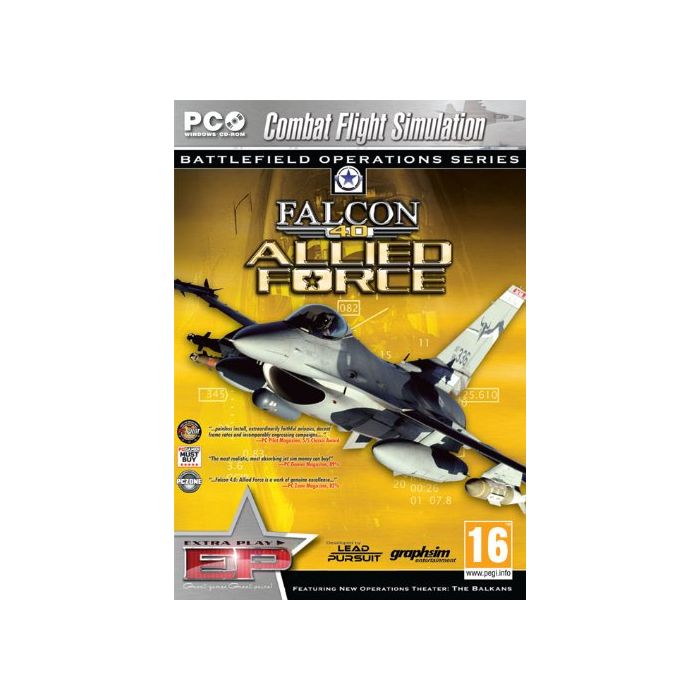 Falcon 4.0 Allied Force is a sophisticated combat flight simulator and an advanced wartime strategy game rolled into one.You are the pilot of a General Dynamics F-16 Fighting Falcon, one of the most successful air superiority fighters ever made. Flying three precisely modelled, highly detailed, and highly realistic variants of this awesome war bird, you will undertake a multitude of critical missions in an intensely volatile and totally dynamic war.Two campaign theatres are provided, each with tens of thousands of entities battling it out in real time as you fly. Everything you do as a pilot directly and proportionately affects the outcome of the conflict... If you fail to take out the surface to air missile site in one mission, it may well take you or your wingmen out in the next...Successfully destroy a bridge in another and you'll impede the advance of enemy ground forces against your troops.Pit your wits against the most demanding computer-controlled pilots in both offensive and defensive air scenarios, or fight it out in dogfights with (or against) other players over a local network, or the Internet.Engage the enemy in two operational theatres - Korea and the Balkans - each covering over a million square Kilometres of territory. Dogfight over a wide variety of landscapes: wide seas, open grasslands, dense forests and snow capped mountains. Fly nap-of-earth missions through detailed terrain and undulating valleys. Rely on advanced AI (Artificial Intelligence) to control your wingmen, or direct them as required throughout the mission.FeaturesAnything and everything can happen in Falcon 4.0 Allied Force. Are you ready for it?